Learning to model and predict how humans interact with objects while performing an action is challenging, and most of the existing video prediction models are ineffective in modeling complicated human-object interactions. Our work builds on hierarchical video prediction models, which disentangle the video generation process into two stages: predicting a high-level representation, such as pose sequence, and then learning a pose-to-pixels translation model for pixel generation. An action sequence for a human-object interaction task is typically very complicated, involving the evolution of pose, person’s appearance, object locations, and object appearances over time. To this end, we propose a Hierarchical Video Prediction model using Relational Layouts. In the first stage, we learn to predict a sequence of layouts. A layout is a high-level representation of the video containing both pose and objects’ information for every frame. The layout sequence is learned by modeling the relationships between the pose and objects using relational reasoning and recurrent neural networks. The layout sequence acts as a strong structure prior to the second stage that learns to map the layouts into pixel space. Experimental evaluation of our method on two datasets, UMD-HOI and Bimanual, shows significant improvements in standard video evaluation metrics such as LPIPS, PSNR, and SSIM. We also perform a detailed qualitative analysis of our model to demonstrate various generalizations. 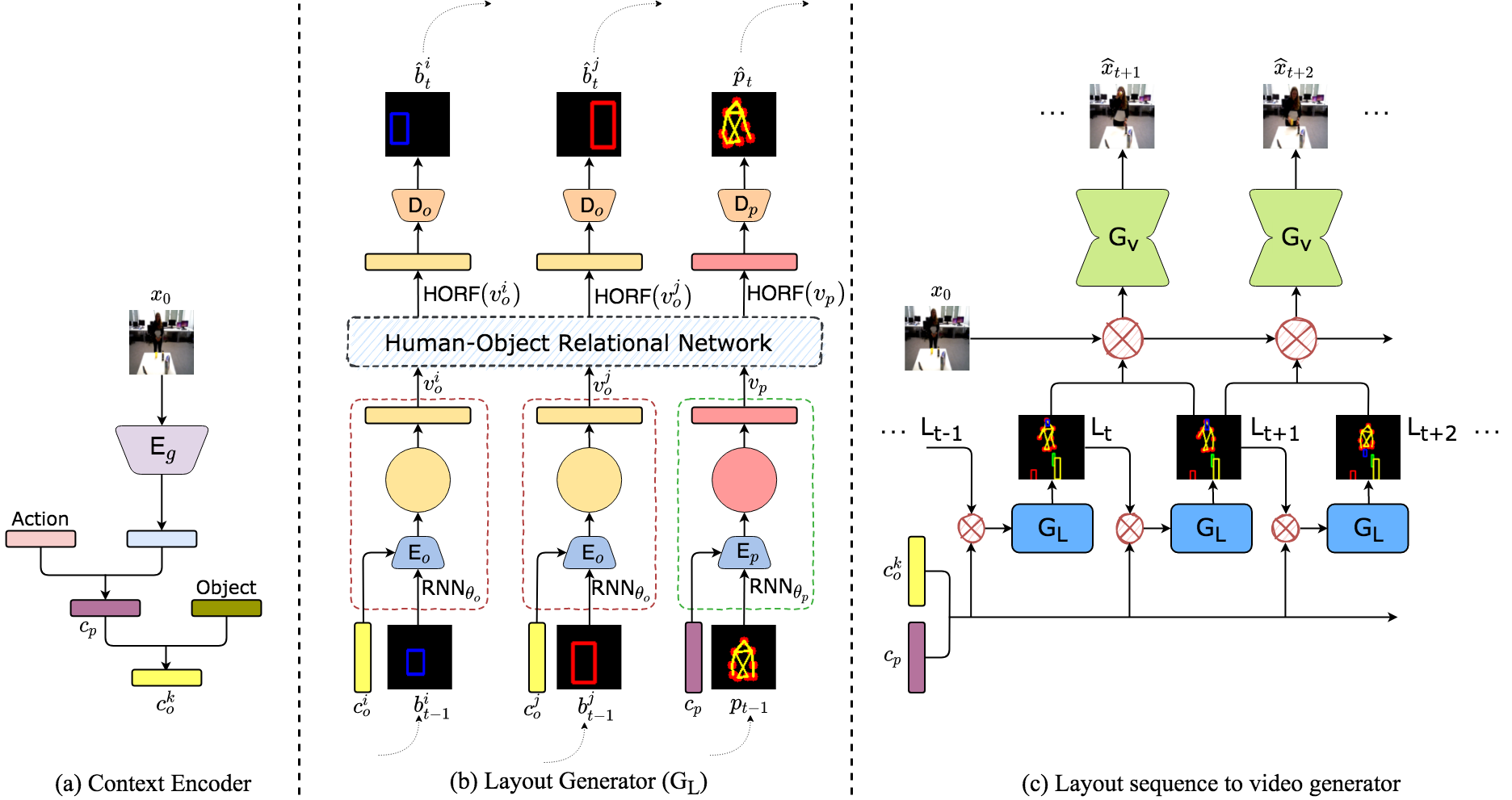 (a) We first learn a set of global context vectors cp for pose and cok for each of the objects. (b) The object and pose sequences are then learned using Recurrent NNs. Specifically, we learn two RNNs, one for pose sequence and the other for the object sequences. In order to learn the correlations among the objects and pose, we pass the output of the encoder network of the pose and object RNNs through a Human Object Relational Network (HORN) before decoding them to predict the next time step. HORN helps in exchanging the information from all the objects and pose before predicting the next step. Therefore, this helps the individual RNNS by providing the context information and hence learns a better sequence model by exploiting the correlations in these sequences. (c) Finally, the layout sequence is mapped to a video. For this we modify the pix2pix architecture to take layout at t, layout at t+1 and first frame as inputs to predict the frame at time step t+1.

Shown below are the videos generated by our model on the Bimanual dataset for the various cooking actions and workshop actions.

Below are qualitative results of bounding box prediction from our model. First row is ground truth sequence and second row is predicted sequence from our model. Observe that our model is able to faithfully capture the spatial relations among various objects. In the second example below, we observe that the predicted video has a phase shift of few frames, which indicates that the model is able predict these sequences with different speeds.

Below are a few generalization results of our model.


Acknowledgements
This work was supported by the DARPA SAIL-ON program via ARO contract no. W911NF2020009 and IARPA via contract no. D17PC00345.